Why does a Bride Carry a Bouquet & toss them at the end? The reason will surprise you..... 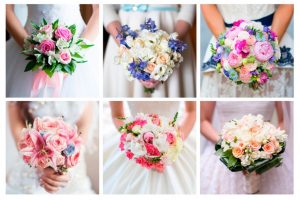 One of the reasons that brides carried bouquets was born out of the necessity covering odor, trying to smell pretty on that special day. In the 1600's and for a very long time afterwards, people bathed extremely infrequently. According to the Huntington Post, during the 15th century, people took their yearly baths in May and would generally get married in June.

Another old and popular custom for carrying a bouquet was to ward off evil spirits. Usually, these bouquets were made from very pungent herbs, spices and yes, garlic could be involved. I am thinking that you could kill two birds with one stone with a garlic bouquet; evil spirits and evil odor could be knocked out at the same time.

Now for the Bouquet toss.... (Also Just as Weird)

In ancient times, a bride was considered especially lucky on her wedding day. So, guest were compelled to tear off parts of her dress to obtain a good luck talisman for themselves! Not all brides cared for this activity, as it seemed unpleasant to have their clothing ripped from her bit by bit, compliments of the guests. So it evolved, that the bride outsmart her guest by giving an offering of herself; enabling a guest to obtain a lucky talisman and allowing herself to keep her clothing intact: she starting throwing her garter and bouquet in lieu of pieces of her dress.