What is the History of the Bridal Veil? 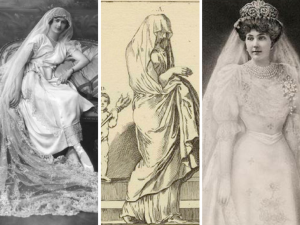 What is the History of the Bridal Veil?


From Judaism to Christianity to Hinduism, wedding ceremonies have involved veils for thousands of years.
Ancient cultures used veils to hide the bride from evil spirits, but as time went on,
veils became a symbol of purity and chastity yet another way to signal to everyone present that the bride was a virgin.

Theres some speculation that in the cases of arranged marriages,
the veil was lifted from the brides face so she could be presented to the groom either right before or after the ceremony for approval.
Then, right before the ceremony lore says that the groom and his family had to make sure they were being given the right daughter
and werent the victims of a bait-and-switch.
The after the ceremony lore says that the veil is lifted after marriage in case the groom doesnt like what he sees.
Then the marriage is already finalized and he cant back out.

In the modern wedding ceremony, the bridal veil should complement the bridal gown; and so,
the most popular colors are white, diamond white, and ivory.
Today, veils of tulle and nylon have come to prominence, though old veils - especially family heirlooms - are still considered lucky.
It's still commonly said to be 'bad luck' for grooms to see their brides before the ceremony, so perhaps the veil is still offering protection from evil spirits.